On today’s IRIS ORCHESTRA MUSIC MINUTE, I want to share an interesting experiment that just began in Philadelphia.

The Berlin-based composer Ari Benjamin Meyers has joined forces with Anthony Tidd, a well known jazz bassist and composer in Philadelphia who among many other endeavors is the Creative Music Program Director at the Kimmel Center for The Performing Arts.

Together, they are seeking to redefine what an orchestra might look like in the 21st century. Inspired by Federico Fellini’s 1978 film Orchestra Rehearsal, which satirizes an orchestra and its conductor as a metaphor for radical political change, they have launched The Philadelphia Public Orchestra, backed by a $700,000 grant from the Pew Foundation. Tidd is the musical director, but within the year he will turn over the management and decision making of the group entirely to the musicians themselves.

There is no pre-determined number of players on any instrument in the 50 member band, and the application process requires no previous experience, just access to an instrument. In fact, the musicians don’t even need to read music. The idea is to give priority to those who have never played in a traditional orchestra but want access to music.

Meyers and Tidd hope that composers will write the music for whatever instrumentation is available and will work with the musicians to bring it to life in whatever way the musicians require. Each musician will receive a $2000 honorarium for their particiation, and any performances they give will be free to the public.

It remains to be seen what impact this project will have. Even before Covid 19 hit us all, things were changing in the music world. But with the intent to bring music into different spheres, it certainly makes the case that music could be a powerful galvanizing force. 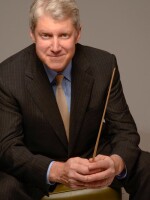 Michael Stern
Michael Stern is the artistic director of IRIS Orchestra in Germantown, Tennessee. This distinctive orchestra is widely praised for the virtuosity of its playing; the depth and variety of its programming, with special emphasis on American contemporary music; and its acclaimed recordings on the Naxos and Arabesque labels. Under Stern’s direction, Iris has commissioned and premiered works by William Bolcom, Chris Brubeck, Richard Danielpour, Stephen Hartke, Edgar Meyer, Jonathan Leshnoff, Ned Rorem, Huang Ruo, Adam Schoenberg, and Ellen Taaffe Zwilich, among others.
See stories by Michael Stern