TweetShareGoogle+Email
Listen
Listening...
/
Hear the radio version of this story

After weeks of backroom talks, Tennessee lawmakers have landed on a compromise that could establish some of the toughest rules on opioid prescribing in the country. Legislators acknowledge they're creating headaches in the process, but they say overdose deaths call for drastic action.

This is the Haslam administration's top priority for the year, and Sen. Ferrell Haile, R-Gallatin, has guided the legislation through negotiations with doctors and pain-patient advocates, pulling from his own experience as a licensed pharmacist.

He told the Senate Health Committee that lawmakers have to act.

"We don't need to be perceived as being resistant to find a solution to this problem," he said. "Will this require more work? Yes, it will. Will it clog up our offices and our pharmacies? Yes, it will. But this is important."

Haile and other supporters cite the state's climbing rate of overdose deaths as a reason to err on the side of too much regulation.

The Tennessee Medical Association provided the most forceful pushback to the plan and has been meeting with lawmakers to recommend changes. But the result of those negotiations is in some ways more strict, not less.

Instead of limiting doctors to prescribing five days for most patients, as initially proposed, the law would now allow for just three days. But for the three-day scripts, physicians won't be required to run a patient’s name through the state’s controlled substance monitoring database, which many complain about being a cumbersome process. 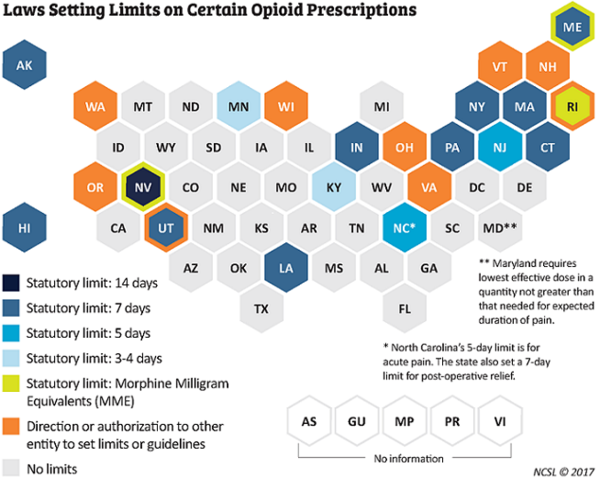 As another concession to doctors, they would be able to prescribe up to a month's worth of painkillers, but only after exhausting other treatment options, completing a tremendous amount of paperwork and even agreeing to a minimum fine if state regulators didn't agree that the month-long prescription was "medically necessary."

There are still lots of exemptions, like for people who've just had major surgery and anyone who has already been on opioids for more than three months. That was one of several objections listed by Sen. Joey Hensley of Hohenwald.

Hensley is a doctor himself and says he's most concerned for patients. He assumes that physicians will be very hesitant to jump through all the hoops to get more medication for people in pain.

Still, the governor's opioid prescribing restrictions got their first committee endorsements Wednesday in both the House and Senate. Haslam is also proposing adding funding for treatment programs and focusing on how professional schools train medical providers, even including dentists and veterinarians.

Sen. Becky Massey, R-Knoxville, says this year's effort will be one of the few items on the General Assembly's agenda that will be remembered a decade from now.

"I believe that ultimately this bill, this piece of legislation that we're all working on, will save lives in the state ... and it will make a difference in people's lives," she said.