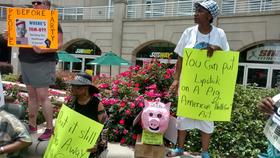 As Republicans in the U.S. Senate near completion of an initial bill that could vastly alter or replace Obamacare, a  group of demonstrators gathered outside the Victory Building in Little Rock. They delivered the offices of Republican Senators Tom Cotton and John Boozman each about a thousand post cards from residents in the state. The cards, collected by activists with Arkansas Community Organizations and the group Health Care for America Now, ask the Senators to preserve Medicaid expansion and other benefits made available through federal health law.

“We could wait for them to take our healthcare or we could fight it every step of the way,” said one demonstrator, 26-year old Camille Richoux of Little Rock. “And I choose to fight every step of the way. And I think a lot of people don’t realize how terrible this would be for Arkansas, so part of what we’re doing is trying to bring awareness to people [and saying] this is going to affect you.”

The group of Senators working on a new health care bill is expected to unveil a healthcare bill on Thursday. Sen. Cotton is one member of the group working on the bill. Earlier this month, he told Talk Business & Politics that Medicaid reform will be a key component of the bill.

“I think in the long run, Medicaid should be transformed into a system where our governors and legislators have a lot more flexibility and discretion to design the system that works for our states. You know, Arkansas is a very different state from California or Oregon,” said Cotton. “Our governor and our legislature should be able to design a healthcare system that works for our population.”