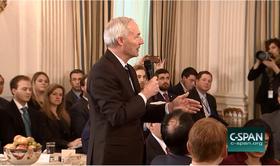 Governor Asa Hutchinson promoted the idea of teachers being armed in schools at a meeting with President Trump on Monday and called for federal terrorist-fighting funds to be redirected locally to schools. The President, who was hosting a few dozen governors during the National Governors Association annual winter meeting, indirectly responded by saying deporting gang members is part of the solution.

Hutchinson told the President that Arkansas has a solid track record with finding instances where it’s appropriate to arm school staff. But the state’s Republican governor said he doesn’t want a top-down federal policy on the subject.

“We have licensed certain school districts and those who want to be trained more significantly so that they can handle an active shooter situation. We have over 13 schools in Arkansas that can’t afford a school resource officer. They prefer to have those either in the classroom, or an assistant coach, or someone that would have a response capability,” said Hutchinson. “I think what the governors want to say is that there can’t be a national security plan but the state’s want to develop this.”

Hutchinson formerly served on a National Rifle Association task force following the Sandy Hook Shooting in Connecticut. He’s also served as an undersecretary at the U.S. Department of Homeland Security. Hutchinson said he’d learned before that one of the biggest obstacles in training armed teachers, if a district desires it, is funding.

“I hope your Department of Homeland Security is looking at some of the grants that come from DHS in terms of security for fighting terrorists, that some of that money can be utilized by local jurisdictions as well for the protection of the number one priority of protecting our students and our schools,” said Hutchinson.

Trump responded seemingly off topic, “Governor, you know how well we’re doing, it’s a never ending quest. But with respect to MS-13 these people are really causing havoc in certain communities and with school children, and with people walking home from school. And we’re moving them out by the thousands. But we have to get immigration laws that allow us to do what we have to be able to do,” said Trump, “that’s also part of it.”

Watch Hutchinson and Trump around the 34 minute mark on C-SPAN.